A celebration of International Women's Day 2019 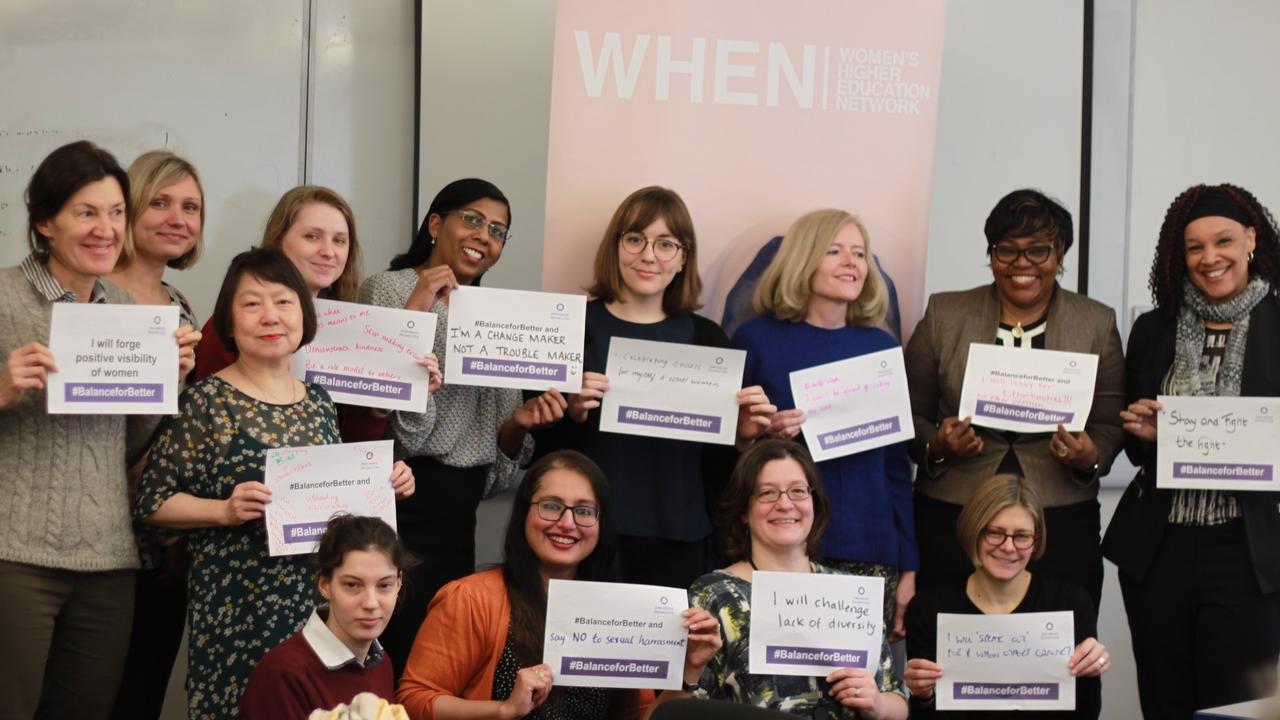 By Clare Hewitt and Madiha Sajid

Monday morning is not usually a time when one feels enthused, inspired and ready to go out and make a real change in the world. But our group of 25 women, who had gathered for WHEN’s celebration of International Women’s Day 2019, were feeling all of that! 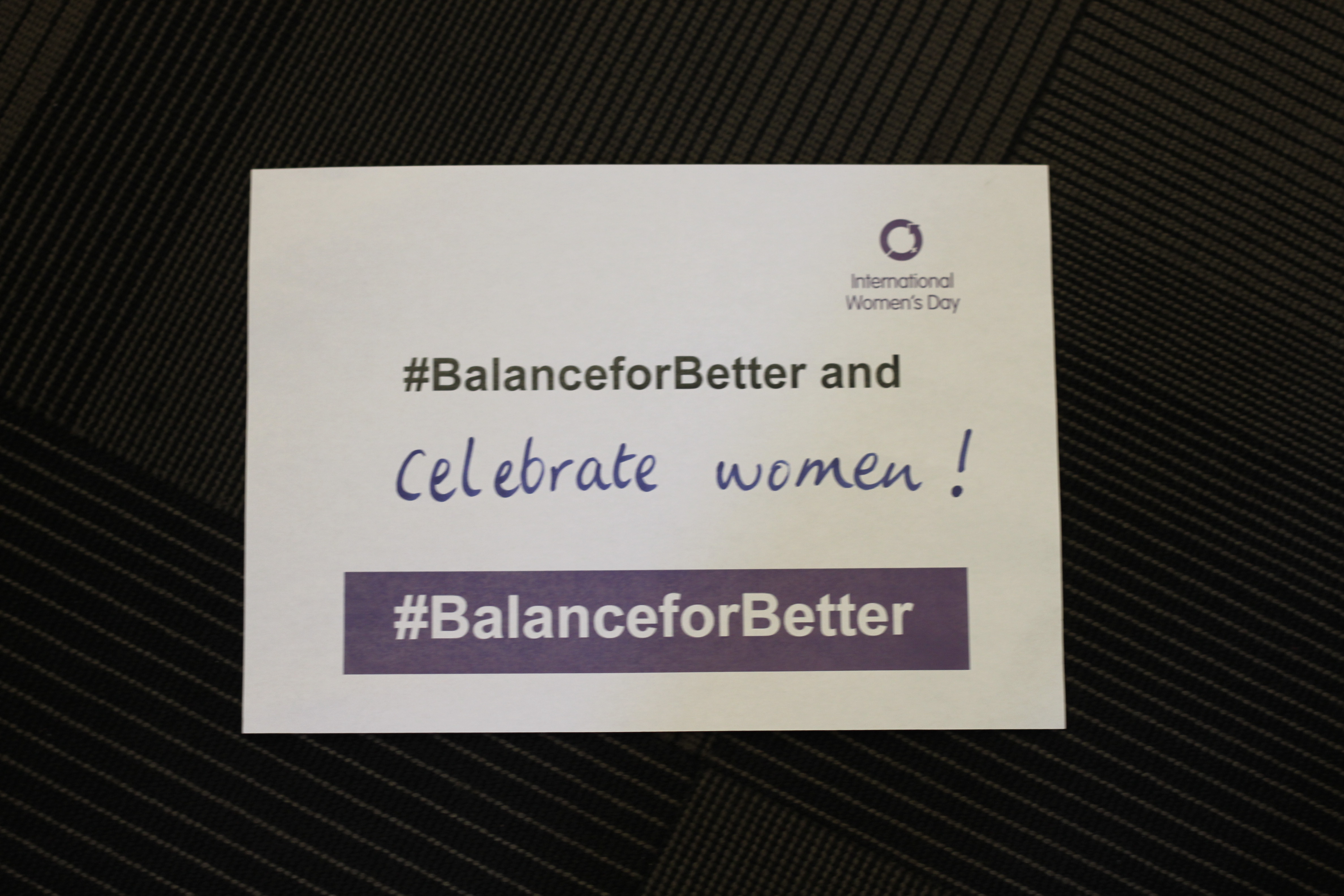 International Women’s Day (IWD) presents a unique opportunity for call-to-action for accelerating gender balance across the world. This year’s theme is Balance for better and at the WHEN event we were lucky to have three amazing speakers sharing their experiences of:

We were then challenged to think about our own behaviours and to draw up our actions for #Balance for better pledges. What would we do to take progressive actions to build a better gender balanced world? This Monday morning task was made all the more easier by the fantastic discussions in our groups and by being inspired by the acts of courage and determination we heard from those around us.

We have summarised key points from the speakers and from our call to action discussion below:

In her talk Sarah shared with us the trials and tribulations of spending 6 months in parliament preparing her ‘blueprint’ for a diversity sensitive House of Commons (The Good Parliament Report, published in 2016.)

It was fascinating to hear the challenges that Sarah had faced in carrying out her research and that frustrating experiences in parliament had only served to make her bolder in wanting to bring about transformative change. The House of Commons is still disproportionately white, male and elite with only 32% women representation which makes it 39th in the world, well below Rwanda, Bolivia and Cuba who have more than 50% women in the lower houses of government.

“There is still no obligation on parties to report on representation or monitor candidate diversity characteristics” Sarah told us as the Government has failed to  enact Section 106 of the Equality Act 2010. So how can this be challenged and changed. There are many factors at play. Women’s organisations are pushing for change but are still too easy to ignore. In Parliament we are told things are the way they are because it’s effective, historic, traditional rather than being what it actually is, in too many instances MPs’ preferences. 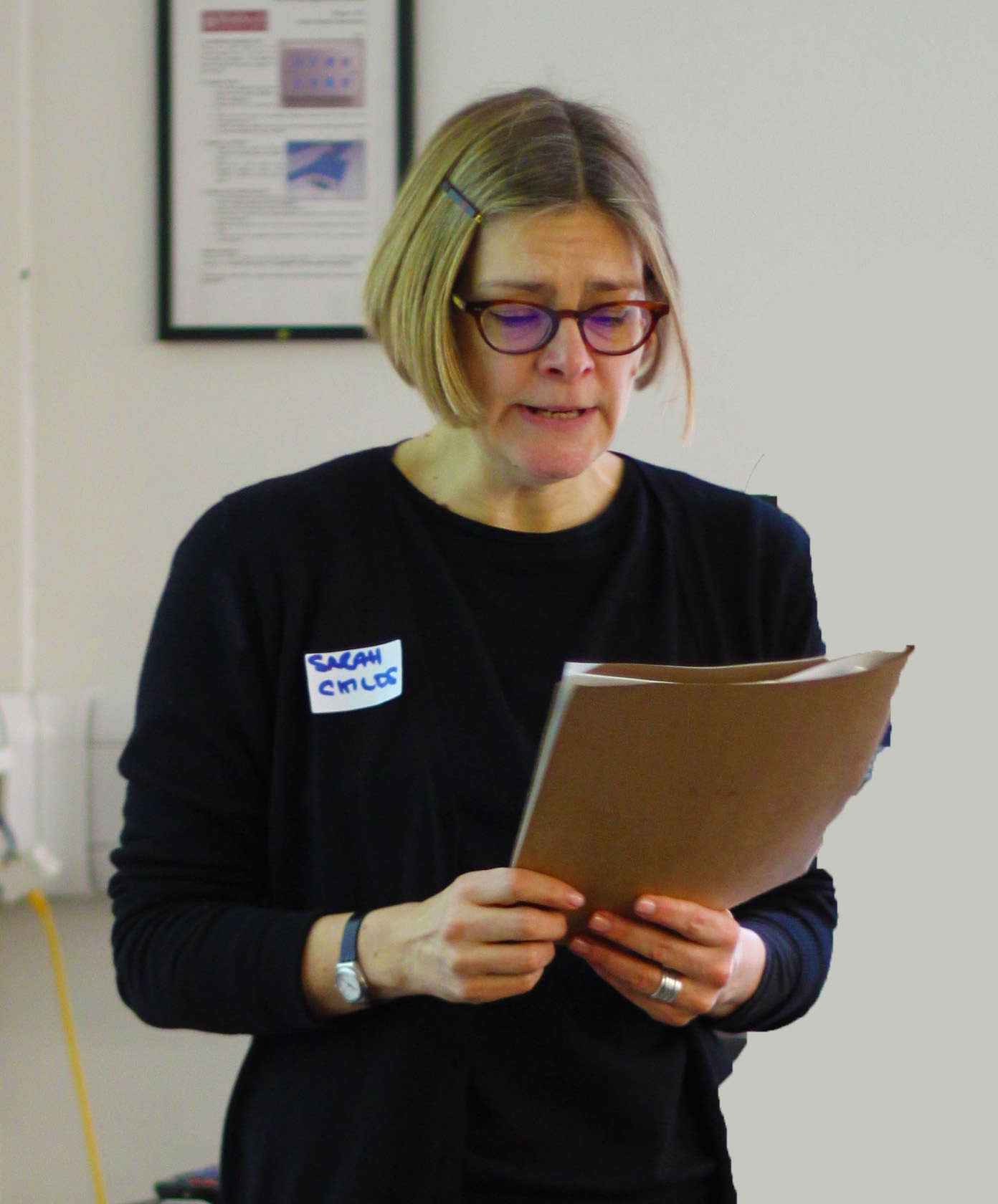 Challenging the status quo is all the harder when an institutional culture has one category of pre-eminent staff (the MPs), with all other staff in place to “serve them” rather than being co-professionals. Late nights and last minute cancellation of recess is difficult enough for MPs, particularly those with childcare, but it also means all the other House of Commons staff have rearrange their plans at short notice too. Sarah also gave the example of tables in the House of Commons canteen being assigned for members only. This kind of institutional culture exacerbates bullying and sexual harassment.

Sarah concluded that rule changes are needed to bring about cultural change in the House of Commons. She also talked about critical actors, those people who will drive change. We have to identify these people in our institutions who have enough authority, power, political capital and resources to bring around change. So it’s not just about getting any women into the House of Commons, but women who can act effectively even when there are few of them. “Don’t confuse a woman’s body with a feminist mind” was a phrase which rang very true. And, that we must take an intersectional approach for which, diversity is key.

Quotas have been shown to be effective; globally there’s a 10% point difference  in the number of women represented where quotas are used. But Western democracies tend to assume they don’t need these rule changes whereas newer democracies are more likely to adopt them and therefore, be more representative. This mindset needs to be challenged and changed.

Madiha’s engaging talk was taken very much from her experience of moving to England 13 years ago from Pakistan, with her daughter and husband. Madiha has faced many challenges which she has surmounted using her “Truth Torpedos” - a reality she has faced and her “Wild Weapons” - how she has dealt with that reality. 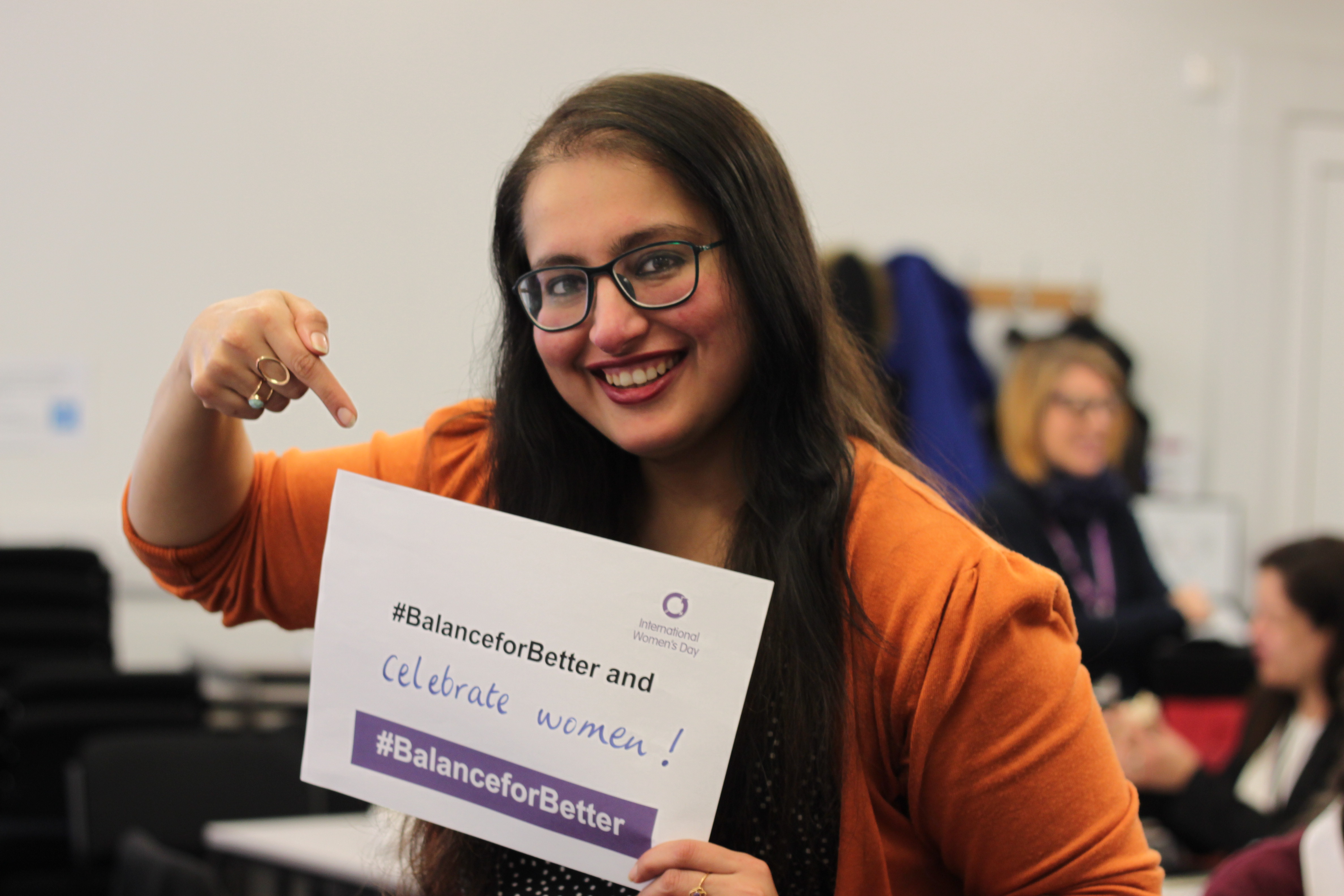 When joining UCL, Madiha as many working mothers do, had taken on a part-time administrative role. As many of us have experienced, ambition and career progression are not seen as important to someone in a part-time role; instead it is just a job to pay the bills. Her first truth torpedo is whilst there were people whom she admired for their specific skills, she found no role model, no-one who was in the same situation as her whom she could connect with and learn from. Her Wild Weapon was to become her own role model! She challenged herself to master tasks, took on trainings and put herself forward for new opportunities. Madiha has pledge to be a role model for other women so she that she can be there for someone else to have a frank and honest conversation about their goals and my aspirations and to help them on their journey.

Madiha’s second “Truth Torpedo” is that finding the balance between being a parent and a professional is an ongoing challenge, with one role spilling into the other with all the conflict and guilt that it brings. Her weapon is to be reasonable with her expectation and to prioritise herself and to have enough courage to say no. There were many nods of recognition round the rooms as Madiha described being so caught up in being a parent and being a professional, that on a rare evening to herself, she found herself alone with nothing to do and no friends to call.

The third “Truth Torpedo” quietened the group because it is all of our experience and that is that sexual harassment is a “when” not an “if”,and it is at age or time. Madiha spoke of the fears for her daughter as she grows and asks “Mum, what do I do when this happens to me.” And the weapon is to speak up, to challenge this behaviour both for ourselves and for those who watch us for inspiration.

Jummy began her talk by highlighting her various roles as a mother, a mentor, a coach and the first female director for an MBA programme. She is the lead for University of East London Women's Network and the HR Leaders network which means that she is better able to provide support and mentorship to women. Balance, for Jummy, is about equilibrium and finding that harmony between “what I do for work and what I do in my life’’.

A qualification in positive psychology introduced her to the fundamentals of PERMA model which rests on the premise that success flows from happiness, not the other way round. We are not happy because we are successful. We are successful when nurture the components happiness in our lives. In order to achieve happiness, we have to think about these five elements of happiness. PERMA stands for positive emotions, engagement, relationships, meaning (for work and life) and accomplishment. Jummy acknowledged that vulnerability is a very strong emotion and it is important to identify who our support network and be able to seek for help where needed, in other words, to avoid the superwoman syndrome. Jummy’s another take on balance means that ‘’I'm proud of what I am doing and I am not apologizing to anyone if I have to do more work’’ because  there are times when a new project at work will demand more energy and then there are times when family becomes a priority. ‘’I am not apologizing to my husband and my children - they have to understand that there will be seasons in my work and they will change’’. 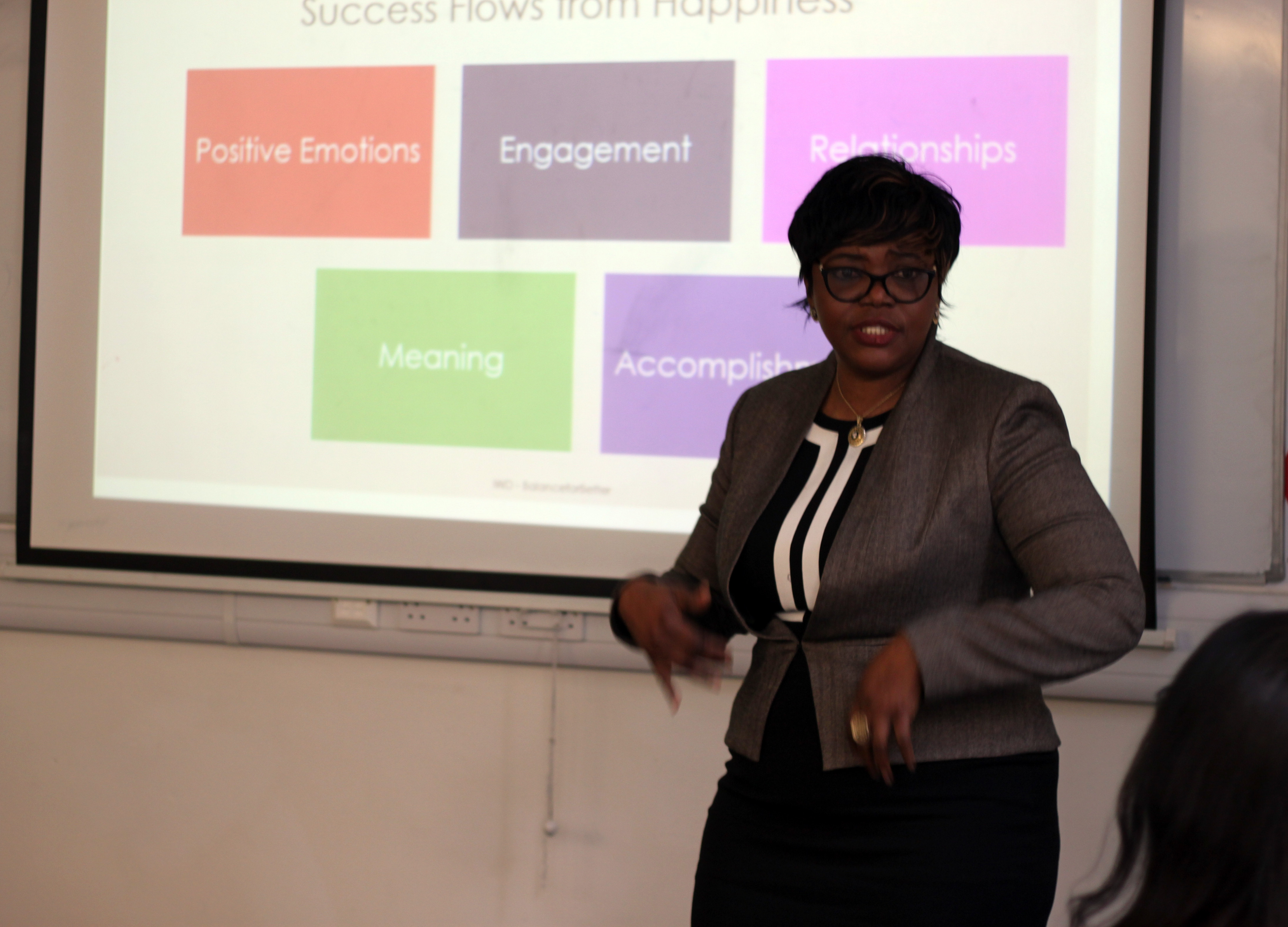 In her talk, Jummy discussed the importance of women celebrating their achievements and not brushing them aside as ‘‘not a major thing’’. She encouraged the audience to think of creative ways in which all women can support each other and share a spotlight with them so that their successes are given the due recognition.

Jummy also talked about the importance of giving permission to ourselves as women to follow our passions and our goals and not to feel guilty about it. Over the time, she realised that in order to be heard at meetings with senior management, she had to do things differently. ‘’I'm going to go in there and will speak up, irrespective of an African accent, it doesn't matter. I have something to offer. I have something to contribute. That means, I will speak up with confidence. It was, it was all with me’’. She brought  a very insightful fact to the audience by explaining that being invited to the party is diversity, being asked to dance is inclusion.

Jummy’s final thought on finding balance is when you start to feel that life is a constant treadmill, you've got to stop and recalibrate yourself. Is this how I want? Is this the speed that I'm comfortable? Or does it feel too much? If it feels too much, that's when you slow down. The speed that feels like a treadmill for one person could be the normal speed for another person, but we each have to decide what is my own speed and if I'm okay with that, that's fine. Otherwise, being constantly on treadmill can lead to burnout and can impact our mental well being.

What will you do to achieve a better balance?

The final task was to invite participants to think about what will they do to help build a more gender balanced world and to take progressive action. The room was buzzing with conversation as our colleagues talked about what mattered most to them. They discussed raising awareness, challenging stereotypes, celebrating achievements, launching initiatives, fundraising for the cause and lobbying for opportunities for women.

It was then time for our favourite part of the day! The #BalanceforBetter selfie! Here are our top three pledges!

The day ended with a group photograph to celebrate the International Women’s Day 2019 and with a networking lunch which provided an opportunity to our participants to continue with their discussions and to build connections. 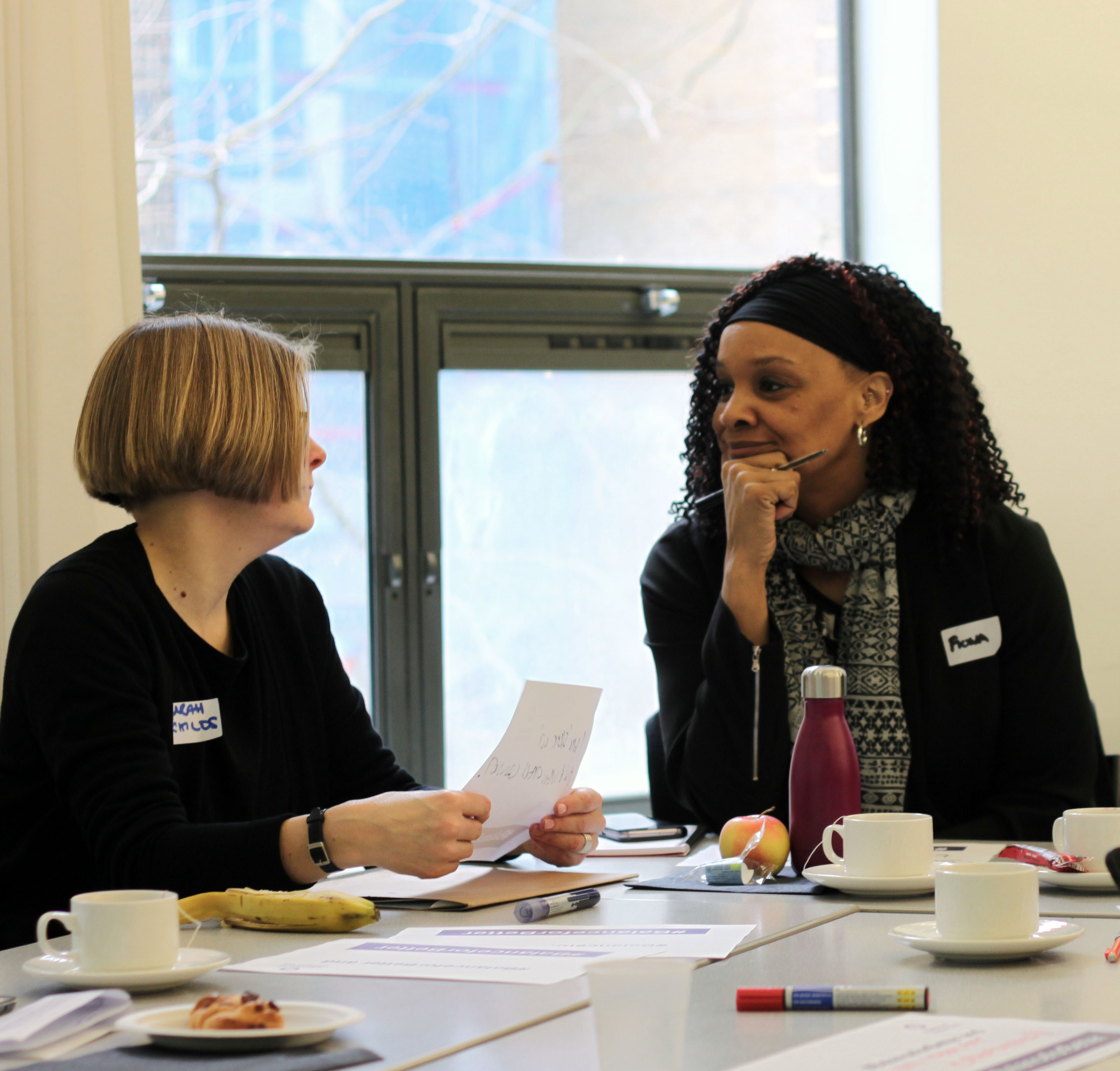 This event was sponsored by our friends from Astrea network at the Birkbeck University and we are very grateful for their support. If you’d like to host a similar event at your institute, please do get in touch with us.

Together, we are stronger!